Artbeats, known for their innovative aerial footage, have made Washington, DC accessible to the world with highest resolution aerials ever offered to the production community. This is an unprecedented advancement for the stock footage industry, due to the highly difficult nature of obtaining permission to film in the most restricted air space in the country.

“All of the effort was rewarded when we finally got clearance to enter the FReeZ (Flight Restricted Zone), and were flying low over the Potomac, with the Capitol on our left, and the Pentagon on our right. To think that we would be able to bring this experience to the world was thrilling,” said Phil Bates, Artbeats CEO and director of the shoot. “This is my passion, to take people where they could not otherwise go.”

During each flight, Artbeats was required to have a law enforcement officer on board. Immediately upon landing, military officers combed through all footage taken, deleting any shot that might compromise national security. “Fortunately, they deleted less than 15 minutes of the nearly four hours of footage we acquired.” continued Bates. “It was sobering, thinking of all the eyes, radar and (probably) guns that were trained on us during our four flights into the FReeZ.”

Since nearly every shot was captured in day, dusk and night versions, editors can now bring the feeling of a full day in DC to their broadcast productions, feature films, and commercials. Subjects include the Capitol Building, Pentagon, Arlington National Cemetery, National Mall, Washington Monument, Lincoln Memorial, Jefferson Memorial, US Supreme Court Building, the Watergate, as well as hospitals, universities, stadiums and other government buildings and landmarks. Artbeats was not allowed to point the camera at the White House, or other sensitive areas, unless the shot was a wide view of the whole city.

All footage was shot from a Twinstar helicopter using a RED EPIC camera mounted in Pictorvision’s Eclipse gyrostabilized gymbal at 5K 2:1 resolution, which was later cropped to 4.5K to remove any lens vignette. World-class aerial cinematographer Doug Holgate, whose television and film resume includes “24,” “Lost,” “Survivor,” “CSI,” “Thor,” “Soul Surfer,” and the upcoming “End of Watch” was brought on as DP/camera operator. Emmy Award-winning pilot Rob Marshall, whose work includes the films “Postcards from the Edge” and “Memoirs of an Invisible Man,” commercial spots for Nike, Taco Bell, Hyundai, and Samsung, and coverage of major sporting events including NFL Monday Night Football and the PGA Shark ShootOut piloted the helicopter. 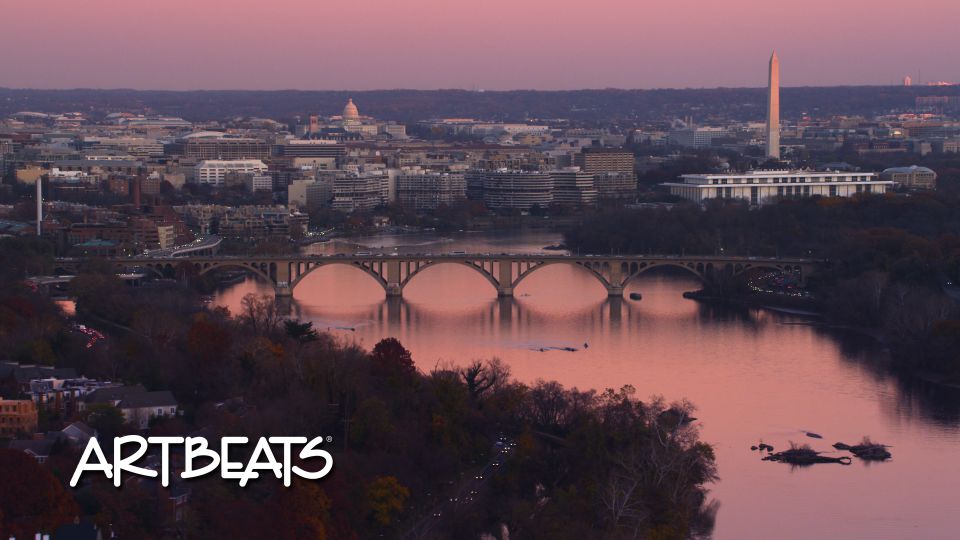 Premium selects of the footage are currently available at artbeats.com/DCAerials with more to follow in the coming months, including a number of Stereoscopic 3D shots. Individual high-definition clips are priced at $599 each. The High-res 4.5K clips are $699 and the R3D files can be purchased for an additional $100. Other cities/landmarks captured during the week-long shoot include both day and night shots of New York and Boston, as well as general footage of Philadelphia, Baltimore, Long Island, Martha’s Vineyard, Providence, Hartford, Atlantic City and much of the Eastern Seaboard coastline. Availability and pricing for this footage will be announced later this year.

Artbeats is headquartered in Myrtle Creek, Ore. with a staff of artists, producers, technicians and marketers. Some of Artbeats’ clients include Dreamworks, Comedy Central, BBC, DirecTV, American Idol, Pixar, CNN, Activision and many more.