Housed in Conte Forum, the indoor arena for hockey and men’s and women’s basketball, the control room is connected to Alumni Stadium via fiber for football coverage. The Athletics Department purchased its Granite last summer through Access AV in Concord, N.H., and installed it in time for its first home hockey game of the season last October.

According to Eric Girard, associate director of interactive media for the Boston College Athletics Department, the control room had been equipped with a Broadcast Pix Slate™ 1000 for three years. Originally, the Slate was used for advertising clips and graphics playback, while the video scoreboard presentation was switched using a Ross switcher. For the past two years, however, the Slate was used exclusively during the production.

When it was time to update the control room, Boston College upgraded to the Granite 2000 because it offered more versatility, including increased I/O and a larger control panel. “The ability to see more on those panels is a huge plus,” he said. 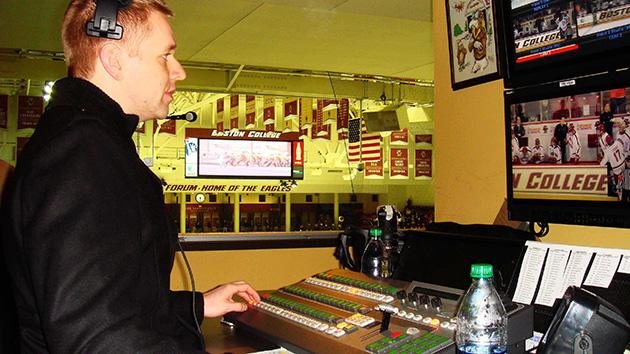 A typical football production uses up to four cameras, a combination of tripod and handheld units, while basketball and hockey can have as many as five cameras for game coverage and replays. Girard said they sometimes use video feeds from production trucks that are producing the game for broadcast for additional coverage.

During hockey and basketball, Fluent Rapid CG™ 2 is used to update scores. An option of Granite and Mica™ systems, it streamlines data-intensive CG graphics creation by integrating databases, RSS feeds, and custom actions like scorekeeping into graphics automatically, which produces customized graphics significantly less manual effort. (Fluent Rapid CG 2 is not used in football, because the stadium’s video boards are positioned on top of separate scoreboards.)

The department uses the Fluent™ Watch-Folders feature almost daily, according to Girard. Production graphics are created in Avid and Adobe After Effects, then dragged into Watch-Folders via the network for instant access during productions. The built-in Harris Inscriber CG, part of the Fluent workflow tools included with each Broadcast Pix system, was another selling point. “It’s convenient and the compatibility with the program is nice,” he said. “For moderate budgets, you couldn’t ask for much more.”

With no full-time TD on staff, Boston College relies on Fluent Macros to provide a consistent look for replays, sponsorship bugs, score tickers, and other on-screen graphics and transitions. Girard estimated there are almost 800 stored macros, and up to 100 macros are used during each game. “It’s a very easy way to get things done,” he explained. “They are extremely beneficial.”