VCC 3.2 features camera control enhancements that include thumbnail displays of each preset position, as well as auto-follow of camera switching and enhanced macro integration

The new camera control software displays a thumbnail of each camera preset position, rather than just the number of each preset, on the system’s Fluent-View enhanced multi-view display. The visual reference helps an operator quickly select the desired camera position. Plus, with new camera follow, each camera’s preset choices appear automatically when that camera is previewed on the switcher. Thumbnails can be created for 100 preset positions on each of up to 12 Panasonic robotic cameras, as well as 16 preset positions on each of up to 12 Sony robotic cameras. 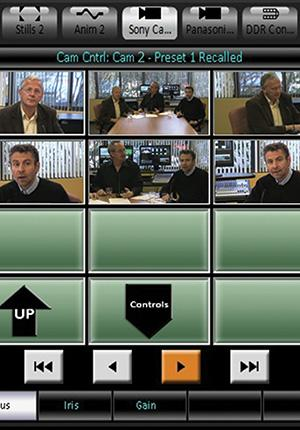 “The new features will definitely benefit our use of robotic cameras,” said Dennis Bergeron, station manager for Holliston Cable Access, Inc., in Holliston, Mass. “Broadcast Pix has significantly improved our production of in-studio shows. Fluent Macros and built-in graphics, clip stores, and animations have allowed us to improve the professional look of our productions. The number of enhancements that come out with every software release is impressive, and I look forward to every release to see what has been added or improved.”

DNxHD, the native Avid 1080i or 720p file format, is the third clip format supported by Fluent Clip Server in every Granite and Mica system. Using Fluent Watch-Folders, 1080i DNxHD clips can flow into Broadcast Pix systems over a TCP/IP network directly from Avid editing stations, even in the middle of a live production. V3.2 also delivers expanded options for ProRes and H.264 formats, adding 720p and SD to existing support for 1080i files.

Originally offered as a 1 M/E panel, the Granite 2000 can now be upgraded to be used as a 2 M/E panel, providing a low-cost system with a small footprint and full 2 M/E functionality. The $1,900 option activates four buttons on the control panel that enable its entire M/E bank to shift to M/E 2, and adds buttons for transitions between M/Es. V3.2 also allows operators to use two control panels simultaneously (1 M/E per panel). For example, one operator can control a live television broadcast while a second operator switches an Internet-based stream, or two panels can control two screens at a live event.

The new Show Link feature allows each show to save and recall its own Fluent-View monitor layout and Fluent Macros. This allows different programs or operators to customize their productions to match their resources, removing unnecessary elements from the Fluent-View layout, resizing and repositioning elements on the screen, and having a list of show-specific Fluent Macros at the ready.