Mobile production company Camp Digital treks all over the country to create television series, specials, DVD, concert and award show productions for the music and entertainment industries, and has used AJA products since its inception five years ago

Mobile production company Camp Digital treks all over the country to create television series, specials, DVD, concert and award show productions for the music and entertainment industries, providing high quality production resources from mobile units that take up a smaller footprint than traditional mobile rigs. Offering scalable services to meet client needs, Camp Digital can run an entire show – including crew, creative and directorial, handing over a finished product at the end – or just provide gear alone. Based in Nashville, the company was co-founded by 4 entertainment production veterans, including Tom Gregory, Vice President of Business Development, five years ago and has used AJA products since its inception.

“We were one of the earliest adopters of the AJA Ki Pro recorders in Nashville,” noted Gregory. “We believed so much in the product that we actually held an open house at our facility and invited producers and directors from around town to come out for a demonstration of the original Ki Pro. That day was a turning point for us and convinced a number of people that the Ki Pro was a very viable alternative to tape. They are ideal for mobile production, where space and weight in the truck are big concerns.”

Leveraging a powerful and compact workflow housed in custom-built, fully capable production studios, Camp Digital trucks can pack the punch of a 53 foot trailer, with smaller real estate demands and at a more economical price point. Their original truck, dubbed Journey HD, deployed eight Ki Pros as an alternative to HD Cam or traditional tape and has run so smoothly, that when they outfitted their newest truck, Thunderbolt HD in January 2012, Camp Digital installed sixteen of AJA’s Ki Pro Racks.

“The Ki Pros have been great for us so when we heard about the Ki Pro Rack and that we would now be able to better service our clients who were posting in Avid as well as our Final Cut clients, we immediately ordered 16 for the new truck,” Gregory said. “We installed them as soon as we could get our hands on them and they have been bullet proof.”

Camp Digital’s newest trailer also includes multiple Sony HDC 1500 cameras, 128 audio inputs with Avid Pro Tools multi track capability with full one-to-one redundancy. On a typical shoot with 8-12 cameras, the Ki Pros will be used to ISO every camera, line record, take a redundant line record, backup select cameras, playback resources to feed screens and roll in packages that may be used in the context of a live program. Recently, Camp Digital used the truck to cover the 2012 National Christmas Tree Lighting Ceremony in Washington, D.C. with the President and the First Family, which was also streamed live on the Internet. Ki Pros were used to ISO record and to roll in vignettes and background packages on the National Park Service within the context of the live show. Once captured, footage was sent directly into post and quickly turned around for broadcast on local PBS affiliates across the country. 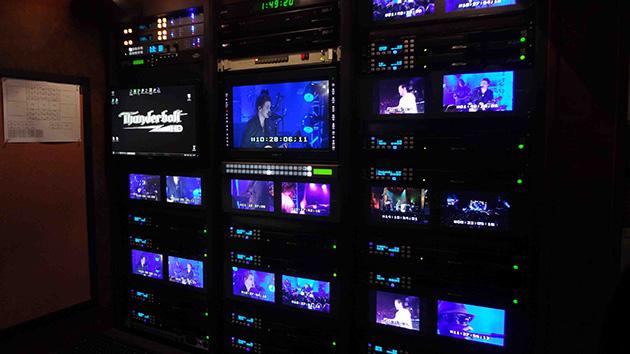 In addition to the Ki Pro family, Camp Digital also use AJA’s universal FS1 and FS2 converters and frame synchronizers on each truck for their incredible versatility and flexibility. The FS1 and FS2s have saved the day on several productions, such as in situations when a client might bring interstitial footage in an odd format that needs an up, down or cross convert. Additionally, they have a number of Hi5 and HD5DA Mini-Converters for up and down conversion and converting analog to SD or vice versa, and ten sets of FiDO SDI/Optical fiber converters for long cable runs, which is often a demand of live event production.

“Last summer we worked on a music competition show called ‘The Next’ for one of the CBS networks, which took us to Orlando, Baltimore, New York, Chicago, Dallas and Los Angeles over the course of six weeks. Many of the venues were small theaters that lacked nearby parking so we had extremely long cable runs to the trucks. Since we use AJA’s FiDOs, we never had any signal issues,” said Gregory. “We also captured a show with country artist Luke Bryan in the middle of a farm field outside Athens, GA. Thanks to our inventory of AJA devices we were able to send and receive video feeds all over the compound as well as facilitate a 5 hour park/power/ESU for a 12 camera concert special. When you are under that type of compressed timeframe, knowing you have what you need to get the job done is a comforting feeling.”

“The beauty of AJA products is they allow a variety of format compatibility,” Gregory concluded. “It seems there’s no set standard for frame rate or resolution, especially among our entertainment clients. They all want some variation. With our AJA gear, we have the freedom to operate in any frame rate and resolution our clients want.”

About AJA Video Systems, Inc. Since 1993, AJA Video has been a leading manufacturer of high-quality and cost-effective digital video interface, conversion and Desktop solutions supporting the professional broadcast and post- production markets. With headquarters in Grass Valley, California, AJA maintains an extensive sales channel of dealers and systems integrators around the world. For further information, please see our websitehttp://www.aja.com.