The new YouTube support features have been added to KVStudio, KnowledgeVision’s powerful tool for creating online video presentations. KVStudio is available on an annual subscription basis, starting at $295 per month.

“Many companies and organizations have invested in huge collections of YouTube videos, many of which are talks that are designed to be supplemented by presentation slides such as Microsoft PowerPoint,” observed KnowledgeVision CEO and Founder Michael Kolowich. “With KnowledgeVision, an ordinary, one-dimensional YouTube video can be turned into a stunningly effective interactive presentation within minutes. And with KnowledgeVision’s advanced analytics, these interactive experiences can be tracked and analyzed right down to the individual viewer.”

Kolowich demonstrated the new features by showing how KnowledgeVision is able to add interactivity and visual enhancements to a YouTube-based talk distributed by the TED Conferences. Within an hour, a non-programmer was able to create a fully interactive version of an April 2012 TEDx presentation, complete with navigation, reference footnotes, high-resolution presentation slides, and a searchable transcript, by embedding the original YouTube video in a KnowledgeVision player:

View the demonstration: “TED Talk on KnowledgeVision: How to Air Condition Outdoor Spaces”

“The combination of KnowledgeVision and YouTube represents a genuine breakthrough in rapid multimedia content creation,” said Kolowich. “In a world where producers are being asked to produce much more video material under time and cost constraints, KnowledgeVision not only helps address that need, but it does so with an interactive result that is demonstrably superior to plain, one-dimensional video.” 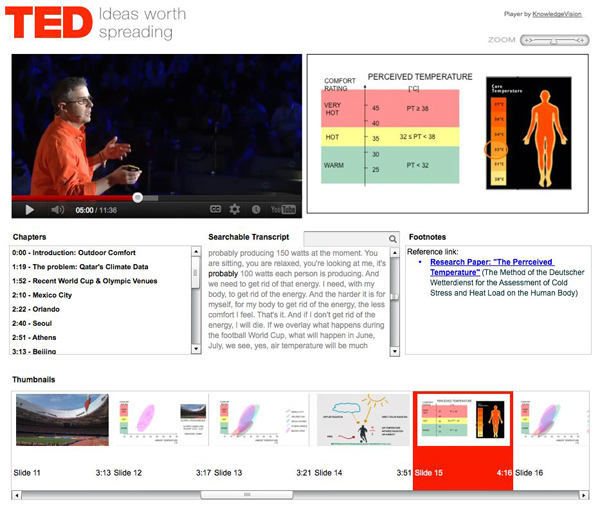 Clients all over the world use KnowledgeVision’s tools — KVStudio and Knovio — to create, share and track orchestrated online video and audio presentations that combine their best communicators with PowerPoint slides, web pages and applications and supplemental material, and make them available from web browsers and mobile devices anytime, anywhere.

KnowledgeVision is a venture-backed company based in Lincoln, Massachusetts.

When your job is to produce corporate presentation videos for delivery online, how do you make them both watchable and effective in one of the few web video genres where less isn’t more? KnowledgeVision has an answer in a new platform that may recast presentations for the online video world.

On the Red Carpet at Streaming Media East, Streaming Media Producer editor Steve Nathans-Kelly interviews Michael Kolowich, CEO of KnowledgeVision Systems, about a new approach to webinars–known variously as “flipped” or “instant”–that delivers a traditional webinar’s video presentation component to attendees on-demand, as soon as they sign up, and then devotes the entire live webinar session to interactive Q & A.