This capture software was developed to meet the request from Windows users who want to record/capture the audio and video during live events using any of the products from the Roland VR or VC line-up.

The popular VR-3 and VR-5 all-in-one audio/video switchers use standard USB audio and video class output drivers for recording and web streaming. Simply connect a USB cable from the mixer to the USB port on a Windows based computer running the free software to capture a live production to your PC.

Mac users can record/capture with VR or VC products by using QuickTime and the “New Movie Recording” feature under the File menu. 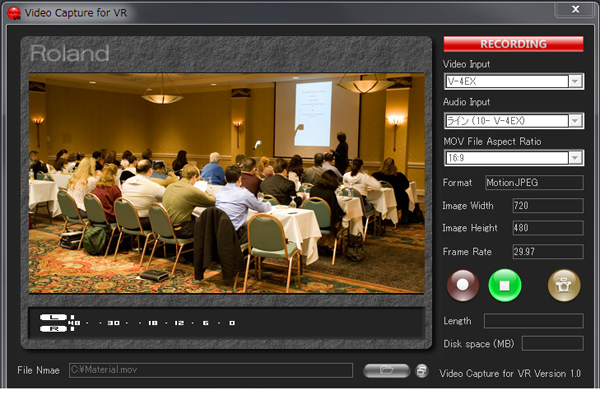 Both free video capture software programs can be found at www.rolandsystemsgroup.com/products/resources/general_apps.
Simply select your Roland model and download the Windows video capture application.

Roland’s VR-5 A/V Mixer features multiple video inputs, an internal media player, computer input and conversion, a built-in audio mixer, two integrated LCD monitors to see video inputs, output and various device settings, and the ability to internally record your program output while also sending your program to a laptop for streaming–all for an MSRP of $4,995.

If you’re in the market for an all-in-one video mixer for webcasting 4:3 NTSC video, Roland’s compact new VR-3 fits the bill nicely. If you need widescreen video output, you may need to add some steps to your workflow when you pair NTSC widescreen video with many of the popular streaming services.

Video production and encoding expert Jan Ozer describes the workflow and challenges of a Livestream webcast he produced for marimba player Larissa Venzie using the Roland VR-3 and Next Computer’s Radius portable workstation.

The V-800HD Live Video Switcher is ideal for any live event or installation that requires the freedom to connect any type of source whether it be digital or analog, computer or video format

Roland V-800HD is a true multi-format video switcher boasting sixteen inputs and eight channels of mixing with independent scalers on the inputs and outputs allowing you to connect any video format including 3G, HD, SD, computer, digital, analog, SDI, and HDMI

The newly released Mac/PC S-4000RCS Version 2.3 control software for the stand-alone Digital Snake and M-48 Personal Mixing System features resizable windows, the ability to tab between fields when naming and setting up sessions, right-click on group knobs, and more

New switcher designed for live events and installations, augments V-1600HD and V-800HD lineup with 12 inputs on 4 channels plus 1 (background), and 2 output buses with independent scalers on the inputs and outputs allowing you to connect HDMI/DVI, RGB, component, and composite sources